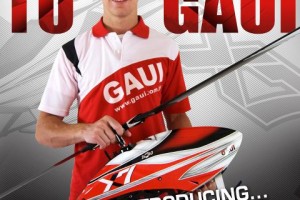 As you may see Gaui has started making drastic changes to improve not
just the brand and image but also raising our R&D to the next level.

With Bobby’s professional experiences and engineer background
we have no doubt he will be a great asset to the company.

Bobby has been involved with RC helicopters since late 2003.
His current sponsors including Gaui, Scorpion Motors, Futaba, OS Engines and Byron Fuels.
Now that he has received his Mechanical Engineering Degree from the University of South Carolina in 2010,
he has continued working in the RC Heli industry and enjoys every bit of it. Recently he moved to Orlando,
Florida, where he can test and develop new products year round.

He is also the co-founder of the educational video series: SmackTalk RC along with his partner Bert Kammerer.

Some notable achievements include:

Welcome to the family, Bobby!